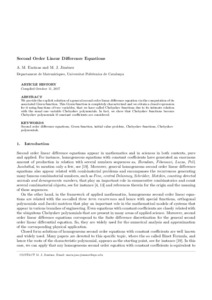 We provide the explicit solution of a general second order linear difference equation via the computation of its associated Green function. This Green function is completely characterized and we obtain a closed expression for it using functions of two–variables, that we have called Chebyshev functions due to its intimate relation with the usual one–variable Chebyshev polynomials. In fact, we show that Chebyshev functions become Chebyshev polynomials if constant coefficients are considered.
CitationEncinas, A., Jiménez, M.J. Second order linear difference equations. "Journal of difference equations and applications", 4 Desembre 2017, p. 1-39.
URIhttp://hdl.handle.net/2117/112719
DOI10.1080/10236198.2017.1408608
ISSN1023-6198
Publisher versionhttp://www.tandfonline.com/doi/abs/10.1080/10236198.2017.1408608?journalCode=gdea20