From Coffee Eclecticism to the Bungalow 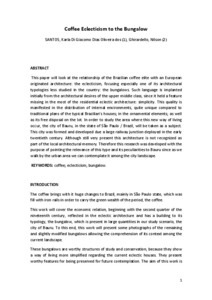 Show full item record
Santos, Karla Di Giacomo Dias Oliveira dos
Ghirardello, Nilson
Document typeConference report
PublisherGIRAS. Universitat Politècnica de Catalunya
Rights accessOpen Access
Abstract
This paper will look at the relationship of the Brazilian coffee elite with an European originated architecture: the eclecticism, focusing especially one of its architectural typologies less studied in the country: the bungalows. Such language is implanted initially from the architectural desires of the upper middle class, since it held a feature missing in the most of the residential eclectic architecture: simplicity. This quality is manifested in the distribution of internal environments, quite unique compared to traditional plans of the typical Brazilian’s houses; in the ornamental elements; as well as its free disposal on the lot. In order to study the area where this new way of living occur, the city of Bauru, in the state of São Paulo / Brazil, will be taken as a subject. This city was formed and developed due a large railway junction deployed in the early twentieth century. Although still very present this architecture is not recognized as part of the local architectural memory. Therefore this research was developed with the purpose of pointing the relevance of this type and its peculiarities to Bauru since as we walk by the urban area we can contemplate it among the city landscape.
CitationSantos, K. D. G. D. O. D.; Ghirardello, N. From Coffee Eclecticism to the Bungalow. A: Arquitectonics. "International Conference Arquitectonics Network: Architecture, Education and Society, Barcelona, 3-5 June 2015: Final papers". Barcelona: GIRAS. Universitat Politècnica de Catalunya, 2015.
URIhttp://hdl.handle.net/2117/112676
ISBN978-84-608-4211-8
Collections
Share: