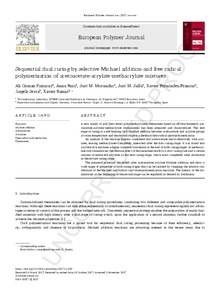 Except where otherwise noted, content on this work is licensed under a Creative Commons license : Attribution-NonCommercial-NoDerivs 3.0 Spain
Abstract
A new family of poly(keto ester)-poly(methacrylate) thermosets based on off-stoichiometric acetoacetate-acrylate/methacrylate formulations has been prepared and characterized. The first stage of curing is a self-limiting click Michael addition between acetoacetate and acrylate groups at room temperature and the second stage is a methacrylate radical photopolymerization. An analysis of the reaction kinetics confirmed that acetoacetate reacts selectively with acrylates, leaving methacrylates completely unreacted after the first curing stage. It was found that acrylate-rich mixtures achieve complete conversion at the end of both curing stages. In methacrylate-rich formulations the dilution effect of this monomer leads to a slow curing rate and a certain amount of unreacted acrylates in the first curing stage, which react completely after irradiation in the second curing stage. The prepared materials are gelled after acetoacetate/acrylate Michael addition and show a wide range of properties at both curing stages that can be tailored by changing the relative contribution of the Michael and radical vinyl homopolymerization reactions. The latency of the formulations at the beginning of the second stage can be regulated as desired by irradiation.
CitationKonuray, A., Ruiz, A., Morancho, J., Salla, J., Fernandez-Francos, X., Serra, À., Ramis, X. Sequential dual curing by selective Michael addition and free radical polymerization of acetoacetate-acrylate-methacrylate mixtures. "European polymer journal", Gener 2018, vol. 98, p. 39-46.
URIhttp://hdl.handle.net/2117/112650
DOI10.1016/j.eurpolymj.2017.11.003
ISSN0014-3057
Publisher versionhttp://www.sciencedirect.com/science/article/pii/S0014305717304391?via%3Dihub
Collections
Share: