An idealised study for the long term evolution of crescentic bars 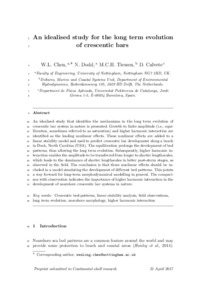 Document typeArticle
Rights accessOpen Access
Abstract
© 2017 Elsevier Ltd. An idealised study that identifies the mechanisms in the long term evolution of crescentic bar systems in nature is presented. Growth to finite amplitude (i.e., equilibration, sometimes referred to as saturation) and higher harmonic interaction are hypothesised to be the leading nonlinear effects in long-term evolution of these systems. These nonlinear effects are added to a linear stability model and used to predict crescentic bar development along a beach in Duck, North Carolina (USA) over a 2-month period. The equilibration prolongs the development of bed patterns, thus allowing the long term evolution. Higher harmonic interaction enables the amplitude to be transferred from longer to shorter lengthscales, which leads to the dominance of shorter lengthscales in latter post-storm stages, as observed at Duck. The comparison with observations indicates the importance of higher harmonic interaction in the development of nearshore crescentic bar systems in nature. Additionally, it is concluded that these nonlinear effects should be included in models simulating the development of different bed patterns, and that this points a way forward for long-term morphodynamical modelling in general.
CitationChen, W., Dodd, N., Tiessen, M., Calvete, D. An idealised study for the long term evolution of crescentic bars. "Continental shelf research", 1 Gener 2018, vol. 152, p. 87-97.
URIhttp://hdl.handle.net/2117/112625
DOI10.1016/j.csr.2017.11.006
ISSN0278-4343
Publisher versionhttp://www.sciencedirect.com/science/article/pii/S0278434317302200?via%3Dihub
Collections
Share: