The landscape design as a social class image: considerations towards the new segregation patterns in Brazil 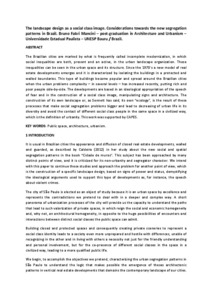 The Brazilian cities are marked by what is frequently called incomplete modernization, in which social inequalities are both, present and an active, in the urban landscape organization. These inequalities can be seen in the urban space and its structure. Since the 1970's a new model of real estate developments emerges and it is characterized by isolating the buildings in a protected and walled boundaries. This type of buildings became popular and spread around the Brazilian cities when the urban problems complexity - in several levels - has increased recently, putting rich and poor people side-by-side. The developments are based in an ideological appropriation of the speech of fear and in the construction of a social class image, manipulating signs and architecture. The construction of its own landscape or, as Sennett has said, its own "ecology", is the result of these processes that make social segregation problems bigger and lead to decreasing of urban life in its diversity and avoid the contact of different social class people in the same space in a civilized way, which is the definition of urbanity. This work was supported by CAPES.
CitationFabri Mancini, B. The landscape design as a social class image: considerations towards the new segregation patterns in Brazil. A: Arquitectonics. "International Conference Arquitectonics Network: Architecture, Education and Society, Barcelona, 3-5 June 2015: Final papers". Barcelona: GIRAS. Universitat Politècnica de Catalunya, 2015.
URIhttp://hdl.handle.net/2117/112623
ISBN978-84-608-4211-8