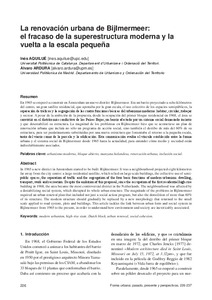 Ardura, Álvaro
Document typeConference lecture
PublisherEdiciones de la Universidad de Castilla-La Mancha (UCLM)
Rights accessOpen Access
Abstract
In 1965 a new district in Amsterdam started to be built: Bijlmermeer. It was a neighbourhood projected eight kilometres far away from the city centre: a large residential satellite, which relied on large scale buildings, the collective use of semipublic spaces, the separation of traffic and the segregation of the four basic functions of modern urbanism: dwelling, transport, work and recreation. Despite the ambition of this proposal, since the occupation of the first residential high-rise building in 1968, the area became the most controversial district in the Netherlands. The neighbourhood was affected by a destabilizing social system, which disrupted its whole urban structure. The magnitude of the problems in Bijlmermeer required an urban renewal plan that included not just a social action program, but also the demolition of more than 60% of its structure. The modern structure should gradually be replaced by a new morphology that returned to the small scale applied to road system, plots and buildings. This article tackles the link between urban form and social system in Bijlmermeer from 1965 to the present, in order to understand how environment and society are inextricably associated.
Location
1: Bijlmer-Oost, Amsterdam-Zuidoost, Països Baixos
CitationAquilue, I., Ardura, Á. La renovación urbana de Bijlmermeer: el fracaso de la superestructura moderna y la vuelta a la escala pequeña. A: I Congreso ISUF-H. "Forma urbana, pasado, presente y perspectivas. Actas del I Congreso ISUF-H.". Toledo: Ediciones de la Universidad de Castilla-La Mancha (UCLM), 2017, p. 226-237.
URIhttp://hdl.handle.net/2117/112601
DOI10.18239/jor_12.2017.04
Collections
Share: