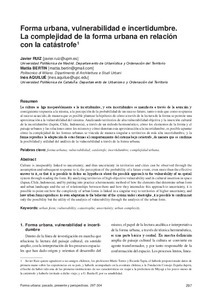 Culture is inseparably linked to uncertainty, and thus uncertainty in territories and cities can be observed through the assumption and subsequent response to it, the perception of the probability of a future event, even more than the effective answer to it, so that it is possible to define an hypothesis about the possible approach to the vulnerability of an spatial system through reading the form. By analyzing territories of high objective vulnerability and its cultural insertion in space (Japan, Chile, Indonesia), and by putting into practice a hermeneutic method of how the elements that determine urban form and urban landscape and the set of relationships between them and how they internalize this approach to uncertainty, it is possible to point out how the complexity of urban forms is linked in a singular way to territories of higher uncertainty, and how urban form reproduces its own adaptation to the behavior of the system under catastrophe, it is possible to confirm not only the possibility but the utility of the analysis of vulnerability through the analysis of the urban form.
CitationRuiz, J., Aquilue, I., Bertin, M. Forma urbana, vulnerabilidad e incertidumbre : la complejidad de la forma urbana en relación con la catástrofe. A: I Congreso ISUF-H. "Forma urbana, pasado, presente y perspectivas. Actas del I Congreso ISUF-H.". Toledo: Ediciones de la Universidad de Castilla-La Mancha (UCLM), 2017, p. 297-304.
URIhttp://hdl.handle.net/2117/112600
DOIdoi.org/10.18239/jor_12.2017.04