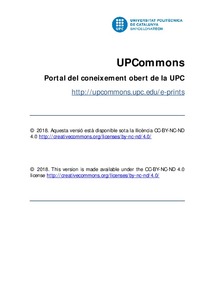 Rojas, Jose Felix
Simon, A. A.
de Pater, Imke
Blalock, J.
Barry, Trevor
Document typeArticle
Rights accessOpen Access
Abstract
The zonal wind profile of Saturn has a unique structure at 60°N with a double-peaked jet that reaches maximum zonal velocities close to 100 ms-1. In this region, a singular group of vortices consisting of a cyclone surrounded by two anticyclones was active since 2012 until the time of this report. Our observation demonstrates that vortices in Saturn can be long-lived. The three-vortex system drifts at u = 69.0 ± 1.6 ms-1, similar to the speed of the local wind. Local motions reveal that the relative vorticity of the vortices comprising the system is ~2–3 times the ambient zonal vorticity. In May 2015, a disturbance developed at the location of the triple vortex system, and expanded eastwards covering in two months a third of the latitudinal circle, but leaving the vortices essentially unchanged. At the time of the onset of the disturbance, a fourth vortex was present at 55°N, south of the three vortices and the evolution of the disturbance proved to be linked to the motion of this vortex. Measurements of local motions of the disturbed region show that cloud features moved essentially at the local wind speeds, suggesting that the disturbance consisted of passively advecting clouds generated by the interaction of the triple vortex system with the fourth vortex to the south. Nonlinear simulations are able to reproduce the stability and longevity of the triple vortex system under low vertical wind shear and high static stability in the upper troposphere of Saturn.
Description
© 2018. This version is made available under the CC-BY-NC-ND 4.0 license http://creativecommons.org/licenses/by-nc-nd/4.0/
Citationdel Rio-Gaztelurrutia, T., Sanchez-Lavega, A., Antuñano, A., Legarreta, J., Garcia-Melendo, E., Sayanagi, K., Hueso, R., Wong, M., Pérez, S., Rojas, J., Simon, A., de Pater, I., Blalock, J., Barry, T. A planetary-scale disturbance in a long living three vortex coupled system in Saturn's atmosphere. "Icarus", 1 Març 2018, vol. 302, p. 499-513.
URIhttp://hdl.handle.net/2117/112596
DOI10.1016/j.icarus.2017.11.029
ISSN0019-1035
Publisher versionhttp://www.sciencedirect.com/science/article/pii/S0019103517304529
Collections
Share: