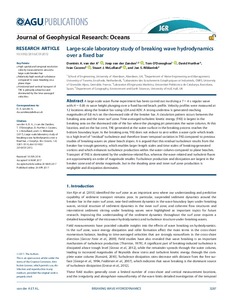 A large-scale wave flume experiment has been carried out involving a T¿=¿4 s regular wave with H¿=¿0.85 m wave height plunging over a fixed barred beach profile. Velocity profiles were measured at 12 locations along the breaker bar using LDA and ADV. A strong undertow is generated reaching magnitudes of 0.8 m/s on the shoreward side of the breaker bar. A circulation pattern occurs between the breaking area and the inner surf zone. Time-averaged turbulent kinetic energy (TKE) is largest in the breaking area on the shoreward side of the bar where the plunging jet penetrates the water column. At this location, and on the bar crest, TKE generated at the water surface in the breaking process reaches the bottom boundary layer. In the breaking area, TKE does not reduce to zero within a wave cycle which leads to a high level of “residual” turbulence and therefore lower temporal variation in TKE compared to previous studies of breaking waves on plane beach slopes. It is argued that this residual turbulence results from the breaker bar-trough geometry, which enables larger length scales and time scales of breaking-generated vortices and which enhances turbulence production within the water column compared to plane beaches. Transport of TKE is dominated by the undertow-related flux, whereas the wave-related and turbulent fluxes are approximately an order of magnitude smaller. Turbulence production and dissipation are largest in the breaker zone and of similar magnitude, but in the shoaling zone and inner surf zone production is negligible and dissipation dominates.
CitationVan Der A, D., Van der Zanden, J., O'Donoghue, T., Hurther, D., Caceres, I., McLelland, S., Ribberink, J. Large-scale laboratory study of breaking wave hydrodynamics over a fixed bar. "Journal of geophysical research-oceans", 1 Abril 2017, vol. 122, núm. 4, p. 3287-3310.
URIhttp://hdl.handle.net/2117/112454
DOI10.1002/2016JC012072
ISSN2169-9275
Publisher versionhttp://onlinelibrary.wiley.com/doi/10.1002/2016JC012072/full