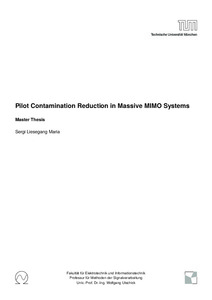 Except where otherwise noted, content on this work is licensed under a Creative Commons license : Attribution-NonCommercial-NoDerivs 3.0 Spain
Abstract
Massive MIMO systems have been pointed out as one of the possible strategies to enhance system performance and reach the high data rates modern wireless communications demand. It represents a breakthrough in modern investigations given the new degrees of freedom and the extra dimensional space it provides. However, given the lack of channel knowledge, estimation must be employed. After this process, some interference due to the fast variation of the channel, which implies users sharing training sequences, is left. This is commonly referred to as pilot contamination and heavily compromises the throughput, specially in the large scale antennas regime. In this thesis, we will first study in detail this dramatic effect for later introducing different proposals that attempt to reduce its impact. In particular, we will start with the use of two main filters as basic processing. Next, allocation schemes to properly distribute users are discussed. Then, we will suggest projection based methods that transform the estimates with the purpose of canceling the undesired portions and strengthen the user destined signals. At the end of this analysis, it is shown numerically that the approaches presented behave well in these scenarios and help mitigate the interference created. This allows a faster and more robust transmission of information to take place in environments where pilot contamination is present.
SubjectsWireless communication systems, MIMO systems, Comunicació sense fil, Sistemes de, Sistemes MIMO
DegreeMÀSTER UNIVERSITARI EN ENGINYERIA DE TELECOMUNICACIÓ (Pla 2013)
Location
1: Thomas-Wimmer-Ring 1A, 80539 München, Alemanya
URIhttp://hdl.handle.net/2117/112439
Collections
Share: