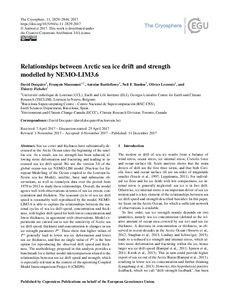 Sea ice cover and thickness have substantially decreased in the Arctic Ocean since the beginning of the satellite era. As a result, sea ice strength has been reduced, allowing more deformation and fracturing and leading to increased sea ice drift speed. We use the version 3.6 of the global ocean–sea ice NEMO-LIM model (Nucleus for European Modelling of the Ocean coupled to the Louvain-la-Neuve sea Ice Model), satellite, buoy and submarine observations, as well as reanalysis data over the period from 1979 to 2013 to study these relationships. Overall, the model agrees well with observations in terms of sea ice extent, concentration and thickness. The seasonal cycle of sea ice drift speed is reasonably well reproduced by the model. NEMO-LIM3.6 is able to capture the relationships between the seasonal cycles of sea ice drift speed, concentration and thickness, with higher drift speed for both lower concentration and lower thickness, in agreement with observations. Model experiments are carried out to test the sensitivity of Arctic sea ice drift speed, thickness and concentration to changes in sea ice strength parameter P*. These show that higher values of P* generally lead to lower sea ice deformation and lower sea ice thickness, and that no single value of P* is the best option for reproducing the observed drift speed and thickness. The methodology proposed in this analysis provides a benchmark for a further model intercomparison related to the relationships between sea ice drift speed and strength, which is especially relevant in the context of the upcoming Coupled Model Intercomparison Project 6 (CMIP6).
CitationDocquier, D. [et al.]. Relationships between Arctic sea ice drift and strength modelled by NEMO-LIM3.6. "The Cryosphere", 12 Desembre 2017, vol. 11, p. 2829-2846.
URIhttp://hdl.handle.net/2117/112431
DOI10.5194/tc-11-2829-2017
ISSN1994-0416
Publisher versionhttps://www.the-cryosphere.net/11/2829/2017/