Integration of foreigners in Egypt: the relief of Amenhotep II shooting arrows at a copper ingot and related scenes 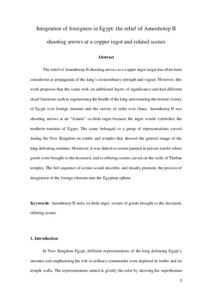 Document typeArticle
Rights accessOpen Access
Abstract
The relief of Amenhotep II shooting arrows at a copper ingot target has often been considered as propaganda of the king’s extraordinary strength and vigour. However, this work proposes that the scene took on additional layers of significance and had different ritual functions such as regenerating the health of the king, and ensuring the eternal victory of Egypt over foreign enemies and the victory of order over chaos. Amenhotep II was shooting arrows at an “Asiatic” ox-hide ingot because the ingot would symbolize the northern enemies of Egypt. The scene belonged to a group of representations carved during the New Kingdom on temples that showed the general image of the king defeating enemies. Moreover, it was linked to scenes painted in private tombs where goods were brought to the deceased, and to offering scenes carved on the walls of Theban temples. The full sequence of scenes would describe, and ritually promote, the process of integration of the foreign element into the Egyptian sphere.
CitationGimenez, F. Integration of foreigners in Egypt: the relief of Amenhotep II shooting arrows at a copper ingot and related scenes. "Journal of Egyptian History", 2017, vol. 10, núm. 2, p. 109-123.
URIhttp://hdl.handle.net/2117/112367
DOI10.1163/18741665-12340036
ISSN1874-1657
Publisher versionhttp://booksandjournals.brillonline.com/content/journals/10.1163/18741665-12340036
Collections
Share: