Scarcity of crossing dependencies: A direct outcome of a specific constraint? 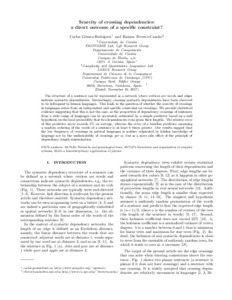 The structure of a sentence can be represented as a network where vertices are words and edges indicate syntactic dependencies. Interestingly, crossing syntactic dependencies have been observed to be infrequent in human languages. This leads to the question of whether the scarcity of crossings in languages arises from an independent and specific constraint on crossings. We provide statistical evidence suggesting that this is not the case, as the proportion of dependency crossings of sentences from a wide range of languages can be accurately estimated by a simple predictor based on a null hypothesis on the local probability that two dependencies cross given their lengths. The relative error of this predictor never exceeds 5 % on average, whereas the error of a baseline predictor assuming a random ordering of the words of a sentence is at least six times greater. Our results suggest that the low frequency of crossings in natural languages is neither originated by hidden knowledge of language nor by the undesirability of crossings per se, but as a mere side effect of the principle of dependency length minimization.
CitationGómez-Rodríguez, C., Ferrer-i-Cancho, R. Scarcity of crossing dependencies: A direct outcome of a specific constraint?. "Physical review E", 4 Desembre 2017, vol. 96, núm. 6, p. 062304-1-062304-12.
URIhttp://hdl.handle.net/2117/112361
DOI10.1103/PhysRevE.96.062304
ISSN2470-0045
Publisher versionhttps://journals.aps.org/pre/abstract/10.1103/PhysRevE.96.062304