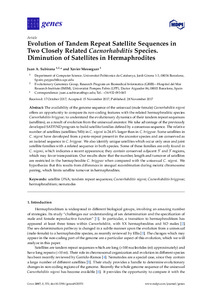 Document typeArticle
Rights accessOpen Access
Abstract
The availability of the genome sequence of the unisexual (male-female) Caenorhabditis nigoni offers an opportunity to compare its non-coding features with the related hermaphroditic species Caenorhabditis briggsae; to understand the evolutionary dynamics of their tandem repeat sequences (satellites), as a result of evolution from the unisexual ancestor. We take advantage of the previously developed SATFIND program to build satellite families defined by a consensus sequence. The relative number of satellites (satellites/Mb) in C. Nigoni is 24.6% larger than in C. Briggsae. Some satellites in C. Nigoni have developed from a proto-repeat present in the ancestor species and are conserved as an isolated sequence in C. Briggsae. We also identify unique satellites which occur only once and joint satellite families with a related sequence in both species. Some of these families are only found in C. Nigoni, which indicates a recent appearance; they contain conserved adjacent 50 and 30 regions, which may favor transposition. Our results show that the number, length and turnover of satellites are restricted in the hermaphrodite C. Briggsae when compared with the unisexual C. Nigoni. We hypothesize that this results from differences in unequal recombination during meiotic chromosome pairing, which limits satellite turnover in hermaphrodites.
CitationSubirana, J., Messeguer, X. Evolution of tandem repeat satellite sequences in two closely related caenorhabditis species: Diminution of satellites in hermaphrodites. "Genes", 1 Desembre 2017, vol. 8, núm. 12, p. 1-17. Article 351.
URIhttp://hdl.handle.net/2117/112354
DOI10.3390/genes8120351
ISSN2073-4425
Publisher versionhttp://www.mdpi.com/2073-4425/8/12/351
Collections
Share: