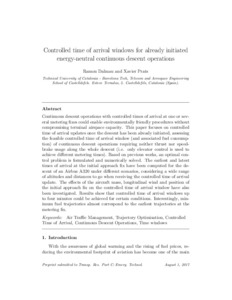 Document typeArticle
Rights accessOpen Access
Abstract
Continuous descent operations with controlled times of arrival at one or several metering fixes could enable environmentally friendly procedures without compromising terminal airspace capacity. This paper focuses on controlled time of arrival updates once the descent has been already initiated, assessing the feasible time window (and associated fuel consumption) of continuous descent operations requiring neither thrust nor speed-brake usage along the whole descent (i.e. only elevator control is used to achieve different metering times). Based on previous works, an optimal control problem is formulated and numerically solved. The earliest and latest times of arrival at the initial approach fix have been computed for the descent of an Airbus A320 under different scenarios, considering the potential altitudes and distances to go when receiving the controlled time of arrival update. The effects of the aircraft mass, initial speed, longitudinal wind and position of the initial approach fix on the time window have been also investigated. Results show that time windows about three minutes could be achieved for certain conditions, and that there is a trade-off between robustness facing controlled time of arrival updates during the descent and fuel consumption. Interestingly, minimum fuel trajectories almost correspond to those of minimum time.
CitationDalmau, R., Prats, X. Controlled time of arrival windows for already initiated energy-neutral continuous descent operations. "Transportation research. Part C, emerging technologies", 1 Desembre 2017, vol. 85, p. 334-347.
URIhttp://hdl.handle.net/2117/112341
DOI10.1016/j.trc.2017.09.024
ISSN0968-090X
Publisher versionhttp://www.sciencedirect.com/science/article/pii/S0968090X17302723?via%3Dihub
Collections
Share: