On dynamical systems for sensorimotor contingencies. A first approach from control engineering 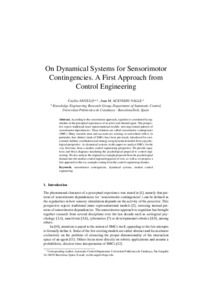 Except where otherwise noted, content on this work is licensed under a Creative Commons license : Attribution-NonCommercial-NoDerivs 3.0 Spain
Abstract
According to the sensorimotor approach, cognition is constituted by regularities in the perceptual experiences of an active and situated agent. This perspective rejects traditional inner representational models, stressing instead patterns of sensorimotor dependencies. Those relations are called sensorimotor contingencies (SMC). Many research areas and accounts are working on and related with it. In particular, four distinct kinds of SMCs have been previously introduced for environment, habitat, coordination and strategy using dynamical models from a psychological perspective. As dynamical systems, in this paper we analyze SMCs, for the very first time, from a modern control engineering perspective. We provide equations and block diagrams translating the psychological proposal to control engineering. We also analyze the original toy example proposed from the psychological domain into the modern control engineering point of view, as well as we propose a first approach to this toy example coming from the control engineering domain.
CitationAngulo, C., Acevedo-Valle, J. M. On dynamical systems for sensorimotor contingencies. A first approach from control engineering. A: International Conference of the Catalan Association for Artificial Intelligence. "Recent Advances in Artificial Intelligence Research and Development: Proceedings of the 20th International Conference of the Catalan Association for Artificial Intelligence, Deltebre, Terres de l'Ebre, Spain, October 25–27, 2017". Deltebre: IOS Press, 2017, p. 46-55.
URIhttp://hdl.handle.net/2117/112313
DOI10.3233/978-1-61499-806-8-46
ISBN978-1-61499-805-1
Publisher versionhttp://ebooks.iospress.nl/volumearticle/47724
Collections
Share: