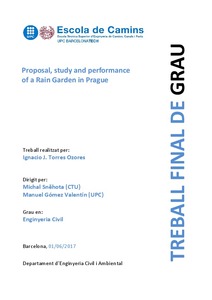 Except where otherwise noted, content on this work is licensed under a Creative Commons license : Attribution 3.0 Spain
Abstract
Bioretention cells play an important role in urban drainage. Over the last years, urbanized and impervious surfaces have drastically increased. As a result, large amount or runoff is expected even after small rainfall events. Water from runoff contains large number of contaminants such as nutrients, heavy metals, organic matter or suspended solids. These pollutants have severe consequences on the receiving waters, such as algae bloom, oxygen deficit, or growth and development problems. Impervious surfaces not only cause problems in receiving waters, but also increase the chances of flooding, and decrease groundwater recharge. These negative effects can be diminished increasing the number and importance of bioretention cells in urban planning, since these infiltration facilities mimic the natural environment, helping to bring back the natural water cycle, filtering pollutants present in water and decreasing the amount of runoff. This kind of sustainable urban drainage system are well known and implemented in Anglo-Saxon countries, such as United Kingdom, United States or Australia where governmental bodies rule its constructions and maintenance. However, in Spain, in spite of having some sustainable urban drainage studies and projects, is still a recent concept, which needs to be developed and considered with the importance it deserves. This study aims to evaluate the hydraulic functionality of these bioretention cells. To do so, a rain garden is designed and assessed under different conditions. The rain garden has an area of 4 m2 and collects water from an adjacent roof of 39.9 m2 . The soil profile proposed for the design of the rain garden is composed of three layers: a first layer of 20 cm composed of 60% sand, 30% silt and 10% clay; an intermediate layer of 10 cm formed by 95% of sand and 5% of silt; and a third layer of 50 cm composed only of sand. To evaluate its hydraulic performance, HYDRUS-1D program is used to simulate the functioning of this infiltration facility for five rainfall events with the largest demand of retention volume in the rain garden, as well as for the precipitation with largest demand from a table with design values of precipitation in Prague. Three weather stations located in the surrounding of the place where the bioretention cell will be built recorded these precipitations and other climatic data every minute along 2015. Parameters such as head pressure and water content across the soil profile of the rain garden; effluent volume from the bottom of the infiltration facility; high of water cumulated on the surface and time needed to infiltrate both the cumulated and total received water are obtained and evaluated for each precipitation under two different initial conditions (a not too dry nether too wet soil, and a very dry soil). These simulations show that the total effluent volume under these conditions is expected to be between 0.072 and 0.148 litres for real precipitations, and 0.384 litres for the design value; show that the cumulated water on the surface reaches 5 cm for real precipitations and 19.79 cm for the design value; and that it takes less than 24 hours to completely infiltrate the water. The results show how rain gardens perform under high rainfall events, which can be the basis for future applications or investigations about how their integration in urban planning can diminish urban runoff and improve water quality in surrounding water courses.
SubjectsCity planning, Urbanisme
DegreeGRAU EN ENGINYERIA CIVIL (Pla 2010)
URIhttp://hdl.handle.net/2117/112168
Collections
Share: