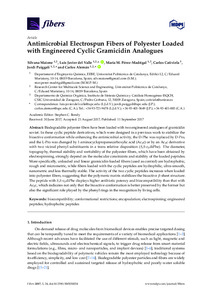 Document typeArticle
Rights accessOpen Access
Abstract
Biodegradable polyester fibers have been loaded with two engineered analogues of gramicidin soviet. In these cyclic peptide derivatives, which were designed in a previous work to stabilize the bioactive conformation while enhancing the antimicrobial activity, the D-Phe was replaced by D-Pro, and the L-Pro was changed by 1-aminocyclopropanecarboxylic acid (Ac3c) or by an Ac3c derivative with two vicinal phenyl substituents in a trans relative disposition (S,S-c3diPhe). The diameter, topography, thermal stability and wettability of the polyester fibers, which have been obtained by electrospinning, strongly depend on the molecular constraints and stability of the loaded peptides. More specifically, unloaded and linear gramicidin-loaded fibers (used as control) are hydrophobic, rough and micrometric, while fibers loaded with the cyclic peptides are hydrophilic, ultra-smooth, nanometric and less thermally stable. The activity of the two cyclic peptides increases when loaded into polyester fibers, suggesting that the polymeric matrix stabilizes the bioactive β-sheet structure. The peptide with S,S-c3diPhe displays higher antibiotic potency and biocompatibility than that with Ac3c, which indicates not only that the bioactive conformation is better preserved by the former but also the significant role played by the phenyl rings in the recognition by living cells.
CitationMaione, S., del Valle, LJ., Pérez-Madrigal, Maria M., Cativiela, C., Puiggali, J., Aleman, C. Antimicrobial electrospun fibers of polyester loaded with engineered cyclic gramicidin analogues. "Fibers", 2017, vol. 5, núm. 34, p. 1-20.
URIhttp://hdl.handle.net/2117/112146
DOI10.3390/fib5030034
ISSN2079-6439
Collections
Share: