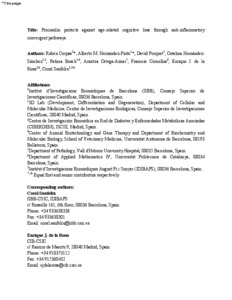 Brain inflammaging is increasingly considered as contributing to age-related cognitive loss and neurodegeneration. Despite intensive research in multiple models, no clinically effective pharmacological treatment has been found yet. Here, in the mouse model of brain senescence SAMP8, we tested the effects of proinsulin, a promising neuroprotective agent that was previously proven to be effective in mouse models of retinal neurodegeneration. Proinsulin is the precursor of the hormone insulin but also upholds developmental physiological effects, particularly as a survival factor for neural cells. Adeno-associated viral vectors of serotype 1 bearing the human proinsulin gene were administered intramuscularly to obtain a sustained release of proinsulin into the blood stream, which was able to reach the target area of the hippocampus. SAMP8 mice and the control strain SAMR1 were treated at 1 month of age. At 6 months, behavioral testing exhibited cognitive loss in SAMP8 mice treated with the null vector. Remarkably, the cognitive performance achieved in spatial and recognition tasks by SAMP8 mice treated with proinsulin was similar to that of SAMR1 mice. In the hippocampus, proinsulin induced the activation of neuroprotective pathways and the downstream signaling cascade, leading to the decrease of neuroinflammatory markers. Furthermore, the decrease of astrocyte reactivity was a central effect, as demonstrated in the connectome network of changes induced by proinsulin. Therefore, the neuroprotective effects of human proinsulin unveil a new pharmacological potential therapy in the fight against cognitive loss in the elderly.
CitationCorpas, R., Hernández, A., Porquet, D., Hernández, C., Bosch, F., Ortega, A., Comellas, F., de la Rosa, E., Sanfeliu, C. Proinsulin protects against age-related cognitive loss through anti-inflammatory convergent pathways. "Neuropharmacology", 1 Setembre 2017, vol. 123, p. 221-232.
URIhttp://hdl.handle.net/2117/112127
DOI10.1016/j.neuropharm.2017.06.014
ISSN0028-3908
Publisher versionhttp://www.sciencedirect.com/science/article/pii/S0028390817302848