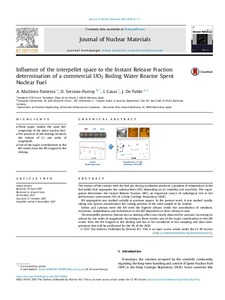 Except where otherwise noted, content on this work is licensed under a Creative Commons license : Attribution 3.0 Spain
Abstract
The contact of the coolant with the fuel pin during irradiation produces a gradient of temperature in the fuel pellet that segregates the radionuclides (RN) depending on its volatility and reactivity. This segregation determines the Instant Release Fraction (IRF), an important source of radiological risk in the performance assessment (PA) of a Deep Geologic Repository (DGR). RN segregation was studied radially in previous papers. In the present work, it was studied axially, taking into special consideration the cutting position of the solid sample to be studied. Iodine and caesium were the RN with the highest release, while the contribution of rubidium, strontium, molybdenum and technetium to the IRF depended on their chemical state. The interpellet presence (known also as dishing) effect was clearly observed for caesium, increasing its release by one order of magnitude. According to these results, one of the major contributions to the IRF comes from the RN trapped in the dishing and has to be considered in the sampling and data interpretation that will be performed for the PA of the DGR.
CitationMartinez, A., Serrano-Purroy, D., Casas, I., De Pablo, J. Influence of the interpellet space to the Instant Release Fraction determination of a commercial UO2 Boiling Water Reactor Spent Nuclear Fuel. "Journal of nuclear materials", Febrer 2018, vol. 499, p. 9-17.
URIhttp://hdl.handle.net/2117/112126
DOI10.1016/j.jnucmat.2017.10.064
ISSN0022-3115
Publisher versionhttp://www.sciencedirect.com/science/article/pii/S0022311517305901?via%3Dihub
Collections
Share: