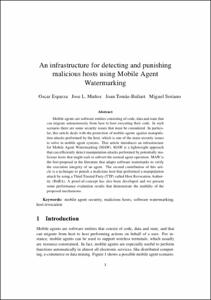 Except where otherwise noted, content on this work is licensed under a Creative Commons license : Attribution-NonCommercial-NoDerivs 3.0 Spain
Abstract
Mobile agents are software entities consisting of code, data, and state that can migrate autonomously from host to host executing their code. In such scenario there are some security issues that must be considered. In particular, this paper deals with the protection of mobile agents against manipulation attacks performed by the host, which is one of the main security issues to solve in mobile agent systems. This paper introduces an infrastructure for mobile agent watermarking (MAW). MAW is a lightweight approach that can efficiently detect manipulation attacks performed by potentially malicious hosts that might seek to subvert the normal agent operation. MAW is the first proposal in the literature that adapts software watermarks to verify the execution integrity of an agent. The second contribution of this paper is a technique to punish a malicious host that performed a manipulation attack by using a trusted third party (TTP) called host revocation authority (HoRA). A proof-of-concept has also been developed and we present some performance evaluation results that demonstrate the usability of the proposed mechanisms.
CitationEsparza, O. [et al.]. An infrastructure for detecting and punishing malicious hosts using mobile agent watermarking. "Wireless communications and mobile computing", 02 Abril 2010.
URIhttp://hdl.handle.net/2117/11205
DOI10.1002/wcm.941
ISSN1530-8669
Collections
Share: