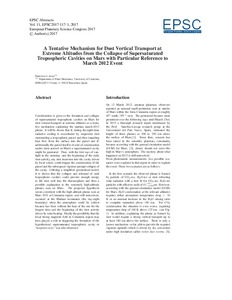 Document typeConference report
Rights accessOpen Access
Abstract
Consideration is given to the formation and collapse of supersaturated tropospheric cavities on Mars for dust vertical transport at extreme altitudes as a tentative mechanism explaining the martian march-2012 plume. It will be shown that if, during the night-time radiative cooling is exarcerbated by suspended dust surrounding a tropospheric parcel and then impeding heat flow from the surface into the parcel and if, additionally the parcel itself is devoid of condensation nuclei (dust aerosol on Mars) a supersaturated cavity might be generated. Then, with the first rays of sunlight in the morning -and the beginning of the daily dust activity, any dust incursion into the cavity driven by local winds, could trigger the condensation of the parcel and the subsequent vigorous prompt collapse of the cavity. Utilizing a simplified geometrical model, it is shown that the collapse and rebound of such tropospheric cavities could provide enough energy to lift dust well into the thermosphere and then a possible explanation to the extremely high-altitude plumes seen on Mars. The proposed hypothesis seems consistent with the high-altitude plume seen at Mars 2012 at Cimmeria region -and still unresolved, occurred at the Martian terminator (the day-night boundary) when the atmosphere could be coldest because has been without the heat of the sun for the longest time and the beginning of the dust activity driven by solar heating. Finally the possibility that the local strong magnetic field in Cimmeria region may have played a role in triggering the formation of the hypothesized supersaturated tropospheric cavity or "magnetocavity" was also discussed.
CitationArias, F.J. A tentative mechanism for dust vertical transport at extreme altitudes from the collapse of supersaturated tropospheric cavities on Mars with particular reference to march 2012 event. A: European Planetary Science Congress. "EPSC abstracts, vol. 11, EPSC2017-129, 2017". Riga: 2017, p. 1-9.
URIhttp://hdl.handle.net/2117/111952
Publisher versionhttp://meetingorganizer.copernicus.org/EPSC2017/EPSC2017-117-1.pdf
Collections
Share: