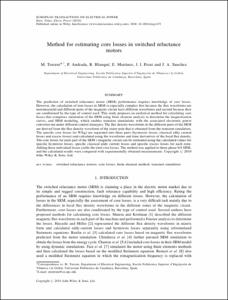 The prediction of switched reluctance motor (SRM) performance requires knowledge of core losses. However, the calculation of iron losses in SRM is especially complex first because the flux waveforms are nonsinusoidal and different parts of the magnetic circuit have different waveforms and second because they are conditioned by the type of control used. This study proposes an analytical method for calculating core losses that comprises simulation of the SRM using finite element analysis to determine the magnetization curves, and SRM modeling, which enables transient simulations with the associated electronic power converter run under different control strategies. The flux density waveforms in the different parts of the SRM are derived from the flux density waveform of the stator pole that is obtained from the transient simulation. The specific core losses (in W/kg) are separated into three parts (hysteresis losses, classical eddy current losses and excess losses) and calculated using the waveforms and time derivatives of the local flux density. The core losses for each part of the SRM’s magnetic circuit can be estimated using the calculated values for specific hysteresis losses, specific classical eddy current losses and specific excess losses for each zone. Adding these individual losses yields the total core losses. The method was applied to three-phase 6/4 SRM, and the calculated results were compared with experimentally obtained measurements.
CitationTorrent, M. [et al.]. Method for estimating core losses in switched reluctance motors. "European transactions on electrical power", 12 Juliol 2010.
URIhttp://hdl.handle.net/2117/11193
DOI10.1002/etep.475
ISSN1430-144X