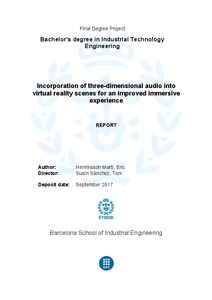 Audio is a crucial aspect to bear in mind when designing virtual reality applications, as it can add a whole new level of immersion to this kind of experiences if properly used. In order to create realistic sound, it is essential to take audio spatialization into consideration, providing the information necessary for an individual to estimate the position of sound sources and the characteristics of surrounding spaces. This project proposes implementing spatial audio in virtual reality scenes created with a game engine, as well as providing all of the theoretical bases that explain how this can be ultimately achieved. It first touches upon how the human auditory system is able to estimate the direction and distance to an audio source by interpreting cues such as time and level differences between ears, pinnae reflections, reverberation and general variations in loudness. Next, the limited spatial properties present in the most common audio reproduction systems are discussed, arguing why they are insufficient for virtual reality applications. Two spatial audio recording and reproduction techniques for headphones and loudspeakers are presented as alternatives for virtual reality scenarios in which the user remains static. As a means of acquiring the knowledge necessary to understand more advanced spatial audio systems, the concept known as Head Related Transfer Function or HRTF is introduced in great detail. It is explained how HRTFs encompass all physical cues that condition sound localization, as well as how the frequency responses that characterize them can be experimentally measured and used for artificial spatialization of virtual sources. Several HRTF-based spatial audio systems are presented, differentiating between those that apply HRTFs as mathematical models and those that make use of experimental impulse response data sets. These advanced models are the way to go if spatial audio is to be applied to virtual reality experiences that involve user motion, as they are capable of constantly adapting to the user’s position and direction relative to the present virtual sources. The rest of the project focuses on how some of the mentioned HRTF-based spatial audio systems can be implemented in the Unity game engine. The poor built-in spatialization options the main software offers can be complemented and greatly improved with the use of audio plugins that perform HRTF filtering and introduce features such as sound occlusion, room simulation models and sound directivity patterns. Three demos with different levels of complexity are finally carried out in Unity in order to showcase the virtues of spatial audio in virtual reality applications.
SubjectsVirtual reality, Sound -- Recording and reproducing, Realitat virtual, So -- Enregistrament i reproducció
URIhttp://hdl.handle.net/2117/111917