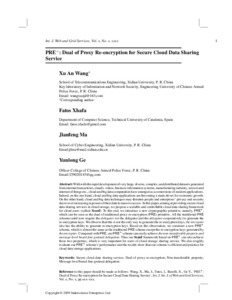 With the rapid development of very large, diverse, complex, and distributed datasets generated from internet transactions, emails, videos, business information systems, manufacturing industry, sensors and internet of things etc., cloud and big data computation have emerged as a cornerstone of modern applications. Indeed, on the one hand, cloud and big data applications are becoming a main driver for economic growth. On the other hand, cloud and big data techniques may threaten people and enterprises’ privacy and security due to ever increasing exposure of their data to massive access. In this paper, aiming at providing secure cloud data sharing services in cloud storage, we propose a scalable and controllable cloud data sharing framework for cloud users (called: Scanf). To this end, we introduce a new cryptographic primitive, namely, PRE+, which can be seen as the dual of traditional proxy re-encryption (PRE) primitive. All the traditional PRE schemes until now require the delegator (or the delegator and the delegatee cooperatively) to generate the re-encryption keys. We observe that this is not the only way to generate the re-encryption keys, the encrypter also has the ability to generate re-encryption keys. Based on this observation, we construct a new PRE+ scheme, which is almost the same as the traditional PRE scheme except the re-encryption keys generated by the encrypter. Compared with PRE, our PRE+ scheme can easily achieve the non-transferable property and message-level based fine-grained delegation. Thus our Scanf framework based on PRE+ can also achieve these two properties, which is very important for users of cloud storage sharing service. We also roughly evaluate our PRE+ scheme’s performance and the results show that our scheme is efficient and practica for cloud data storage applications.
CitationWang, X., Xhafa, F., Ma, J., Ge, Y. PRE+: dual of proxy re-encryption for secure cloud data sharing service. "International journal of web and grid services", Gener 2018, vol. 14, núm. 1, p. 44-69.
URIhttp://hdl.handle.net/2117/111912
ISSN1741-1106
Publisher version10.1504/IJWGS.2018.088394