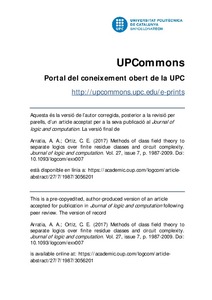 Ortiz, Carlos E.
Document typeArticle
Rights accessOpen Access
Abstract
Separations among the first-order logic Res(0,+,×) of finite residue classes, its extensions with generalized quantifiers, and in the presence of a built-in order are shown in this article, using algebraic methods from class field theory. These methods include classification of spectra of sentences over finite residue classes as systems of congruences, and the study of their h-densities over the set of all prime numbers, for various functions h on the natural numbers. Over ordered structures, the logic of finite residue classes and extensions are known to capture DLOGTIME-uniform circuit complexity classes ranging from AC to TC. Separating these circuit complexity classes is directly related to classifying the h-density of spectra of sentences in the corresponding logics of finite residue classes. General conditions are further shown in this work for a logic over the finite residue classes to have a sentence whose spectrum has no h-density. A corollary of this characterization of spectra of sentences is that in Res(0,+,×,<)+M, the logic of finite residue classes with built-in order and extended with the majority quantifier M, there are sentences whose spectrum have no exponential density.
Description
This is a pre-copyedited, author-produced version of an article accepted for publication in Journal of logic and computation following peer review.
CitationArratia, A., Ortiz, C. Methods of class field theory to separate logics over finite residue classes and circuit complexity. "Journal of logic and computation", 27 Febrer 2017, vol. 27, núm. 7, p. 1987-2009.
URIhttp://hdl.handle.net/2117/111902
DOI10.1093/logcom/exx007
ISSN0955-792X
Publisher versionhttps://academic.oup.com/logcom/article-abstract/27/7/1987/3056201
Collections
Share: