A billingual texto-to-speech system in spanish and catalan 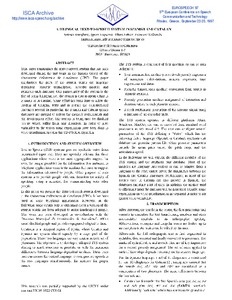 Document typeConference report
PublisherEditors: G. Kokkinakis, N. Fakotakis, E. Dermatas; Editorial: WCL, University of Patras, Grece
Rights accessOpen Access
Abstract
This paper summarises the text-to-speech system that has been developed during the last years in the Speech Group of the Universitat Politccnica de Catalunya (UPC). The paper emphasises the parts of the system which are language dependent: phonetic transcription, prosodic module, and synthesis units database. One particularity of the system is the fact of being bilingual, i.e., the system is able to speak either in Spanish or in Catalan. Some effort has been done to allow the reading of bilingual texts and to reduce the computational resources needed. In particular, the Spanish and Catalan speech databases are merged to reduce the memory requirements and the development effort. The system is being used by disabled people which suffer from oral disorders. In order to give variability to the voices some experiments have been done in voice transformation using the TD-PSOLA algorithm.
CitationBonafonte, A., Esquerra, I., Febrer, A., Vallverdu, F. A billingual texto-to-speech system in spanish and catalan. A: European Conference on Speech Communication and Technology (EUROSPEECH). "Proceedings of EUROSPEECH '97". Rhodes: Editors: G. Kokkinakis, N. Fakotakis, E. Dermatas; Editorial: WCL, University of Patras, Grece, 1997, p. 2455-2458.
URIhttp://hdl.handle.net/2117/111873
ISBN1018-4074
Collections
Share: