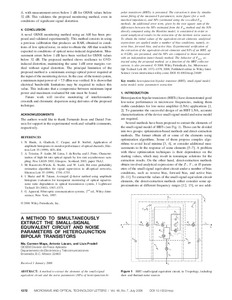 A method to extract the elements of the small-signal equivalent circuit and the noise parameters (NPs) of heterojunction bipolar transistors (HBTs) is presented. The extraction is done by simultaneous fitting of the measured S-parameters, noise figure (for a well-matched impedance), and NPs (estimated using the so-called F50 method). An additional error term, given by the root square sum of the differences between the NPs estimated from the F50 method and the NPs directly computed using the Hawkins model, is considered in order to avoid nonphysical results in the extraction of the intrinsic noise sources. To obtain the initial values of the equivalent-circuit elements, analytical expressions are applied under a number of bias conditions, namely, reverse bias, forward bias, and active bias. Experimental verification of the extraction of the equivalent-circuit elements and NPs of an HBT, up to 8 GHz, are presented, and the NPs are compared to those measured with an independent (tuner-based) method. The behavior of Fmin, extracted using the proposed method, as a function of the HBT collector current, is also presented.
CitationMaya, M. C.; Lázaro, A.; Pradell, L. A method to simultaneously extract the small-signal equivalent circuit and noise parameters of heterojunction bipolar transistors. Microwave and optical technology letters, 2006, vol. 48, núm. 7, p. 1372-1379.
URIhttp://hdl.handle.net/2117/1118
ISSN0895-2477