Centrality measure in social networks based on linear threshold model 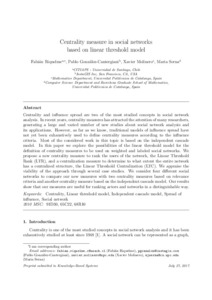 Document typeArticle
Rights accessOpen Access
Abstract
Centrality and influence spread are two of the most studied concepts in social network analysis. In recent years, centrality measures have attracted the attention of many researchers, generating a large and varied number of new studies about social network analysis and its applications. However, as far as we know, traditional models of influence spread have not yet been exhaustively used to define centrality measures according to the influence criteria. Most of the considered work in this topic is based on the independent cascade model. In this paper we explore the possibilities of the linear threshold model for the definition of centrality measures to be used on weighted and labeled social networks. We propose a new centrality measure to rank the users of the network, the Linear Threshold Rank (LTR), and a centralization measure to determine to what extent the entire network has a centralized structure, the Linear Threshold Centralization (LTC). We appraise the viability of the approach through several case studies. We consider four different social networks to compare our new measures with two centrality measures based on relevance criteria and another centrality measure based on the independent cascade model. Our results show that our measures are useful for ranking actors and networks in a distinguishable way.
CitationRiquelme, F., Gonzalez, P., Molinero, X., Serna, M. Centrality measure in social networks based on linear threshold model. "Knowledge-based systems", 15 Gener 2018, vol. 140, p. 92-102.
URIhttp://hdl.handle.net/2117/111727
DOI10.1016/j.knosys.2017.10.029
ISSN0950-7051
Publisher versionhttp://www.sciencedirect.com/science/article/pii/S0950705117304975?via%3Dihub
Collections
Share: