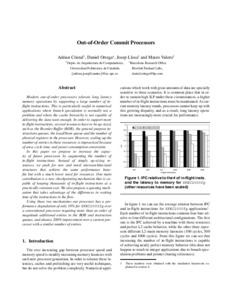 Modern out-of-order processors tolerate long latency memory operations by supporting a large number of in-flight instructions. This is particularly useful in numerical applications where branch speculation is normally not a problem and where the cache hierarchy is not capable of delivering the data soon enough. In order to support more in-flight instructions, several resources have to be up-sized, such as the reorder buffer (ROB), the general purpose instructions queues, the load/store queue and the number of physical registers in the processor. However, scaling-up the number of entries in these resources is impractical because of area, cycle time, and power consumption constraints. We propose to increase the capacity of future processors by augmenting the number of in-flight instructions. Instead of simply up-sizing resources, we push for new and novel microarchitectural structures that achieve the same performance benefits but with a much lower need for resources. Our main contribution is a new checkpointing mechanism that is capable of keeping thousands of in-flight instructions at a practically constant cost. We also propose a queuing mechanism that takes advantage of the differences in waiting time of the instructions in the flow. Using these two mechanisms our processor has a performance degradation of only 10% for SPEC2000fp over a conventional processor requiring more than an order of magnitude additional entries in the ROB and instruction queues, and about a 200% improvement over a current processor with a similar number of entries.
CitationCristal, A., Ortega, D., Llosa, J., Valero, M. Out-of-order commit processors. A: International Symposium on High-Performance Computer Architecture. "IEE Proceedings- Software". Madrid: Institute of Electrical and Electronics Engineers (IEEE), 2004, p. 48-59.
URIhttp://hdl.handle.net/2117/111581
DOI10.1109/HPCA.2004.10008
ISBN0-7695-2053-7
Publisher versionhttp://ieeexplore.ieee.org/document/1410064/