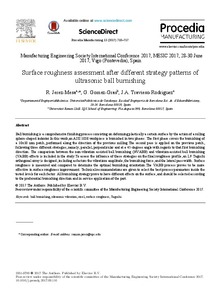 Ball burnishing is a comprehensive finishing process consisting on deforming plastically a certain surface by the action of a rolling sphere-shaped indenter. In this work, an AISI 1038 workpiece is burnished in two phases. The first phase covers the burnishing of a 10x10 mm patch, performed along the direction of the previous milling. The second pass is applied on the previous patch, following three different strategies, namely, parallel, perpendicular and at a 45-degrees angle with regards to that first burnishing direction. The comparison between the non-vibration assisted ball burnishing (NVABB) and vibration-assisted ball burnishing (VABB) effects is included in the study. To assess the influence of these strategies on the final roughness profile, an L9 Taguchi orthogonal array is designed, including as factors the vibrations amplitude, the burnishing force, and the lateral pass width. Surface roughness is measured and compared to determine the optimal burnishing orientation. The VABB process proves to be more effective in surface roughness improvement. Technical recommendations are given to select the best process parameters inside the tested levels for each factor. All burnishing strategy prove to have different effects on the surface, and should be selected according to the preferential burnishing direction and in service application of the part.
CitationJerez-Mesa, R., Gomez, G., Travieso-Rodríguez, J.A. Surface roughness assessment after different strategy patterns of ultrasonic ball burnishing. "Procedia manufacturing", 5 Octubre 2017, vol. 13, p. 710-717.
URIhttp://hdl.handle.net/2117/111554
DOI10.1016/j.promfg.2017.09.116
ISSN2351-9789
Publisher versionhttp://www.sciencedirect.com/science/article/pii/S2351978917307515