Can bus bootloader for the STM32F407VG 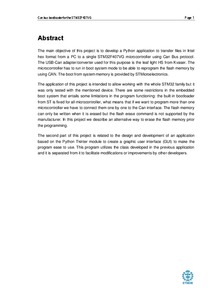 The main objective of this project is to develop a Python application to transfer files in Intel hex format from a PC to a single STM32F407VG microcontroller using Can Bus protocol. The USB-Can adapter/converter used for this purpose is the leaf light HS from Kvaser. The microcontroller has to run in boot system mode to be able to reprogram the flash memory by using CAN. The boot from system memory is provided by STMicroelectronics. The application of this project is intended to allow working with the whole STM32 family but it was only tested with the mentioned device. There are some restrictions in the embedded boot system that entails some limitations in the program functioning: the built-in bootloader from ST is fixed for all microcontroller, what means that if we want to program more than one microcontroller we have to connect them one by one to the Can interface. The flash memory can only be written when it is erased but the flash erase command is not supported by the manufacturer. In this project we describe an alternative way to erase the flash memory prior the programming. The second part of this project is related to the design and development of an application based on the Python Tkinter module to create a graphic user interface (GUI) to make the program ease to use. This program utilizes the class developed in the previous application and it is separated from it to facilitate modifications or improvements by other developers.
SubjectsMicrocontrollers, Microcomputers -- Buses, Data transmission systems, Computer network protocols, Microcontroladors, Microordinadors -- Busos, Dades -- Transmissió, Protocols de xarxes d'ordinadors
URIhttp://hdl.handle.net/2117/111488