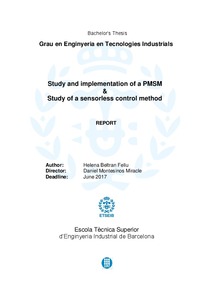 The procedure followed in the project begins with a brief introduction of the features that the studied motor, a permanent magnet synchronous motor (PMSM), has. The fact that the motor is synchronous permanent magnet has to do with its greater efficiency in comparison with the induction motor, which is the most used nowadays. Then, the project is conducted in two steps. The first one is the study of the PMSM mathematical modelling and the subsequent control method applied. The second one is the study of a sensorless control algorithm. Traditionally for speed dependent applications, some kind of sensor is used to read the motor speed and position and feed the value back to the controller. However, extra sensors require extra physical space in the application and it also introduces another source of failure in the system. Thus, with the additional purposes of reducing cost and maintenance needs, the sensor can be replaced by an estimator that mathematically estimates the speed or position of the rotor. All these implementations have been simulated with MATLAB/Simulink based on the mathematical models. To design a controlled drive, the stability characteristics of PMSM under open-loop control (without having any feedback for speed) are analysed. The analysis shows that the PMSM becomes unstable after exceeding a certain applied speed. After tuning the controllers, it has been analysed that the maximum speed that the closed-loop can control with a reasonable settling time is 750 rpm. The more speed that the motor achieves, the more settling time appears. Thus, there is an upper limit for the speed. For all the simulations, an optimal speed of 550 rpm has been used. The control structure and the design of the controllers are described. A rotor position estimation technique for sensorless operation is studied. The estimator uses predictor-corrector method where the difference between the estimated current and the measured current (current error) is used to correct a predicted rotor position. More investigations are still required for accurate rotor position estimation.
SubjectsElectric motors, Synchronous, Permanent magnet motors, Motors elèctrics sincrònics, Motors d’imants permanents
URIhttp://hdl.handle.net/2117/111486