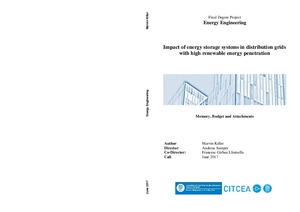 Document typeBachelor thesis
Rights accessOpen Access
Abstract
The present framework of the electric power system enhances the gradual introduction of renewable energy sources because of environmental requirements. Within this setting, renewable micro-generators are progressively spreading in low voltage (LV) distribution grids acting as self-consumption energy supply for residential and industrial electric schemes. Distributed generation through renewable micro-generators in LV networks causes signi cant alterations in the electric parameters due to surplus injected energy in o -peak load demand hours. As a result of disturbing the power balance of the electric grid, over-voltage appears, power ow is upset and current increases. To permit further implementation of renewable micro-generators in LV grids, such as PV panels and wind turbines, mitigation techniques must be developed to regulate the in icted alterations. Hence, the objective of the present work enhances the evaluation of energy storage systems to work as mitigation tools. According to the settled premises, the present study analyzes the e ectiveness of centralized batteries on the electric parameters of LV distribution grids with many renewable micro-generator modules, and their in uence on unbalanced phases and energy losses, all through simulations. Therefore, a speci c simulation tool has been created, automating the entire procedure through an algorithm that functions in the MATLABr and MATPOWER working environment. In order to acquire appropriate and valid result outcomes during the simulation process, a speci c model that recreates a realistic residential LV distribution grid with included micro-generators and centralized energy storage system has been established based on real data. Furthermore, di erent possible scenarios modifying variable parameters of the model are discussed in order to approximate the case study to real conditions (average behavior and best/worst case scenarios). Ultimately the outcomes of the simulation process are evaluated in order to determine the e ectiveness and viability of the proposed mitigation tool. Therefore, all positive and negative traits are appraised according to technological vantages and economic viability of the technology. To conclude, apart from the sections included in the analysis of the present study, additional relevant working areas are also featured within the appendices of the project. These include environmental impact, economic study, computation methods, tool descriptions and utilized data.
SubjectsRenewable energy sources, Electric power systems, Energies renovables
URIhttp://hdl.handle.net/2117/111443
Collections
Share: