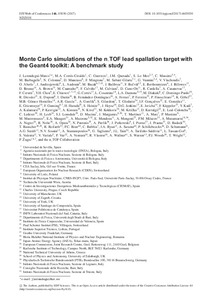 Document typeConference lecture
PublisherEDP Sciences
Rights accessOpen Access
Abstract
Monte Carlo (MC) simulations are an essential tool to determine fundamental features of a neutron beam, such as the neutron flux or the ¿ -ray background, that sometimes can not be measured or at least not in every position or energy range. Until recently, the most widely used MC codes in this field had been MCNPX and FLUKA. However, the Geant4 toolkit has also become a competitive code for the transport of neutrons after the development of the native Geant4 format for neutron data libraries, G4NDL. In this context, we present the Geant4 simulations of the neutron spallation target of the n TOF facility at CERN, done with version 10.1.1 of the toolkit. The first goal was the validation of the intra-nuclear cascade models implemented in the code using, as benchmark, the characteristics of the neutron beam measured at the first experimental area (EAR1), especially the neutron flux and energy distribution, and the time distribution of neutrons of equal kinetic energy, the so-called Resolution Function. The second goal was the development of aMonte Carlo tool aimed to provide useful calculations for both the analysis and planning of the upcoming measurements at the new experimental area (EAR2) of the facility.
CitationLerendegui-Marco, J., Cortés-Giraldo, M., Guerrero Sánchez, C., Calviño, F., Casanovas, A., Cortes, G. Monte Carlo simulations of the n TOF lead spallation target with the Geant4 toolkit: A benchmark study. A: International Conference on Nuclear Data for Science and Technology. "EPJ Web of Conferences, vol. 146 (2017); ND 2016: International Conference on Nuclear Data for Science and Technology: Bruges, Belgium: 11-16 September 2016". Bruges: EDP Sciences, 2016, p. 03030-1-03030-4.
URIhttp://hdl.handle.net/2117/111442
DOI10.1051/epjconf/201714603030
ISBN978-2-7598-9020-0
Collections
Share: