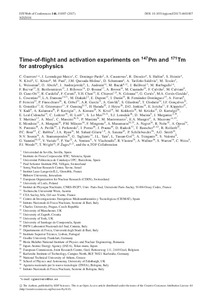 Time-of-flight and activation experiments on 147Pm and 171Tm for astrophysics (230,9Kb)
Share:

Document typeConference lecture
PublisherEDP Sciences
Rights accessOpen Access
European Commission's projectCHANDA - solving CHAllenges in Nuclear DAta (EC-FP7-605203)
NEUTANDALUS - NeutAndalus: boosting interdisciplinary neutron science in Spain and Europe (EC-FP7-334315)
Abstract
The neutron capture cross section of several key unstable isotopes acting as branching points in the s-process are crucial for stellar nucleosynthesis studies, but they are very challenging to measure due to the difficult production of sufficient sample material, the high activity of the resulting samples, and the actual (n,gamma ) measurement, for which high neutron fluxes and effective background rejection capabilities are required. As part of a new program to measure some of these important branching points, radioactive targets of 147Pm and 171Tm have been produced by irradiation of stable isotopes at the ILL high flux reactor. Neutron capture on 146Nd and 170Er at the reactor was followed by beta decay and the resulting matrix was purified via radiochemical separation at PSI. The radioactive targets have been used for time-of-flight measurements at the CERN n TOF facility using the 19 and 185m beam lines during 2014 and 2015. The capture cascades were detected using a set of four C6D6 scintillators, allowing to observe the associated neutron capture resonances. The results presented in this work are the first ever determination of the resonance capture cross section of 147Pm and 171Tm. Activation experiments on the same 147Pm and 171Tm targets with a high-intensity 30 keV quasi-Maxwellian flux of neutrons will be performed using the SARAF accelerator and the Liquid-Lithium Target (LiLiT) in order to extract the corresponding Maxwellian Average Cross Section (MACS). The status of these experiments and preliminary results will be presented and discussed as well.
CitationGuerrro Sánchez, C., Lerendegui-Marco, J., Domingo-Pardo, C., Calviño, F., Casanovas, A., Cortes, G., Tarifeño, A. Time-of-flight and activation experiments on 147 Pm and 171 Tm for astrophysics. A: International Conference on Nuclear Data for Science and Technology. "EPJ Web of Conferences, vol. 146 (2017); ND 2016: International Conference on Nuclear Data for Science and Technology: Bruges, Belgium: 11-16 September 2016". Bruges: EDP Sciences, 2016, p. 01007-1-01007-4.
URIhttp://hdl.handle.net/2117/111408
DOI10.1051/epjconf/201714601007
ISBN978-2-7598-9020-0
Collections
Share: