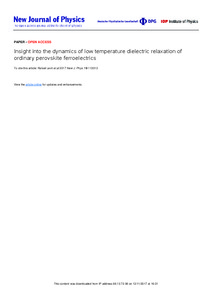 The temperature dependence of the dielectric response of ordinary ferroelectric materials exhibits a frequency-independent anomalous peak as a manifestation of the ferroelectric to paraelectric phase transition. A second anomaly in the permittivity has been reported in different ferroelectric perovskite-type systems at low temperatures, often at cryogenic temperatures. This anomaly manifests as a frequency-dependent local maximum, which exhibits similar characteristics to that observed in relaxor ferroelectrics around their phase transition. The origin of this unexpected behavior is still controversial. In order to clarify this phenomenon, a model-free route solution is developed in this work. Our findings reveal the same critical linear pattern/glass-like freezing behavior previously observed for glass-forming systems. Contrary to current thought, our results suggest that a critical-like dynamic parameterization could provide a more appropriate solution than the conventional Vogel–Fulcher–Tammann equation. The implemented methodology may open a new pathway for analyzing relaxation phenomena in other functional materials like relaxor ferroics.
CitationLevit, R., Ochoa, D. A., Martínez-García, J. C., Garcia, J. E. Insight into the dynamics of low temperature dielectric relaxation of ordinary perovskite ferroelectrics. "New journal of physics", 10 Novembre 2017, vol. 19, p. 113013-1-113013-9.
URIhttp://hdl.handle.net/2117/111396
DOI10.1088/1367-2630/aa91c8
ISSN1367-2630
Publisher versionhttp://iopscience.iop.org/article/10.1088/1367-2630/aa91c8