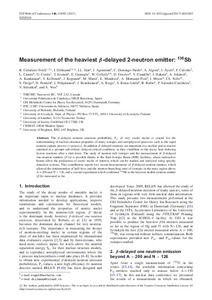 The Beta-delayed neutron emission probability, Pn , of very exotic nuclei is crucial for the understanding of nuclear structure properties of many isotopes and astrophysical processes such as the rapid neutron capture process (r-process). In addition Beta-delayed neutrons are important in a nuclear power reactor operated in a prompt sub-critical, delayed critical condition, as they contribute to the decay heat inducing fission reactions after a shut down. The study of neutron-rich isotopes and the measurement of Beta-delayed one-neutron emitters (Beta1n) is possible thanks to the Rare Isotope Beam (RIB) facilities, where radioactive beams allow the production of exotic nuclei of interest, which can be studied and analyzed using specific detection systems. This contribution reports two recent measurements of Beta-delayed neutron emitters which allowed the determination of half-lives and the neutron branching ratio of isotopes in the mass region above A = 200 and N > 126, and a second experiment which confirmed 136Sb as the heaviest double neutron emitter (Beta2n) measured so far.
CitationCaballero-Folch, R., Taín, J.L., Agramunt, J., Calviño, F., Cortes, G., Riego Pérez, A. Measurement of the heaviest Beta-delayed 2-neutron emitter: 136Sb. A: International Conference on Nuclear Data for Science and Technology. "EPJ Web of Conferences, vol. 146 (2017); ND 2016: International Conference on Nuclear Data for Science and Technology: Bruges, Belgium: 11-16 September 2016". Bruges: EDP Sciences, 2016, p. 01005-1-01005-4.
URIhttp://hdl.handle.net/2117/111375
DOI10.1051/epjconf/201714601005
ISBN978-2-7598-9020-0