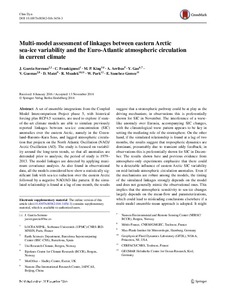 A set of ensemble integrations from the Coupled Model Intercomparison Project phase 5, with historical forcing plus RCP4.5 scenario, are used to explore if state-of-the-art climate models are able to simulate previously reported linkages between sea-ice concentration (SIC) anomalies over the eastern Arctic, namely in the Greenland–Barents–Kara Seas, and lagged atmospheric circulation that projects on the North Atlantic Oscillation (NAO)/Arctic Oscillation (AO). The study is focused on variability around the long-term trends, so that all anomalies are detrended prior to analysis; the period of study is 1979–2013. The model linkages are detected by applying maximum covariance analysis. As also found in observational data, all the models considered here show a statistically significant link with sea-ice reduction over the eastern Arctic followed by a negative NAO/AO-like pattern. If the simulated relationship is found at a lag of one month, the results suggest that a stratospheric pathway could be at play as the driving mechanism; in observations this is preferentially shown for SIC in November. The interference of a wave-like anomaly over Eurasia, accompanying SIC changes, with the climatological wave pattern appears to be key in setting the mediating role of the stratosphere. On the other hand, if the simulated relationship is found at a lag of two months, the results suggest that tropospheric dynamics are dominant, presumably due to transient eddy feedback; in observations this is preferentially shown for SIC in December. The results shown here and previous evidence from atmosphere-only experiments emphasize that there could be a detectable influence of eastern Arctic SIC variability on mid-latitude atmospheric circulation anomalies. Even if the mechanisms are robust among the models, the timing of the simulated linkages strongly depends on the model and does not generally mimic the observational ones. This implies that the atmospheric sensitivity to sea-ice changes largely depends on the mean-flow and parameterizations, which could lead to misleading conclusions elsewhere if a multi-model ensemble-mean approach is adopted. It might also represent an important source of uncertainty in climate prediction and projection. Modelling efforts are hence further required to improve representation of the background atmospheric circulation and reduce biases, in order to attain more accurate covariability.
CitationGarcía-Serrano, J. [et al.]. Multi-model assessment of linkages between eastern Arctic sea-ice variability and the Euro-Atlantic atmospheric circulation in current climate. "Climate Dynamics", Octubre 2017, vol. 49, núm. 7-8, p. 2407-2429.
URIhttp://hdl.handle.net/2117/111363
DOI10.1007/s00382-016-3454-3
ISSN0930-7575
Publisher versionhttps://link.springer.com/article/10.1007/s00382-016-3454-3