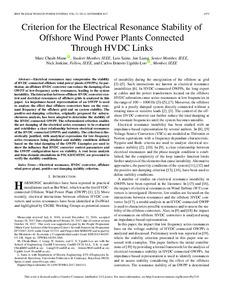 Liang, Jun
Jenkins, Nicholas
Ugalde Loo, Carlos E.
Document typeArticle
Rights accessOpen Access
Abstract
Electrical resonances may compromise the stability of HVDC-connected offshore wind power plants (OWPPs). In particular, an offshore HVDC converter can reduce the damping of an OWPP at low-frequency series resonances, leading to the system instability. The interaction between offshore HVDC converter control and electrical resonances of offshore grids is analyzed in this paper. An impedance-based representation of an OWPP is used to analyze the effect that offshore converters have on the resonant frequency of the offshore grid and on system stability. The positive-net-damping criterion, originally proposed for subsynchronous analysis, has been adapted to determine the stability of the HVDC-connected OWPP. The reformulated criterion enables the net damping of the electrical series resonance to be evaluated and establishes a clear relationship between electrical resonances of the HVDC-connected OWPPs and stability. The criterion is theoretically justified, with analytical expressions for low-frequency series resonances being obtained and stability conditions defined based on the total damping of the OWPP. Examples are used to show the influence that HVDC converter control parameters and the OWPP configuration have on stability. A root locus analysis and time-domain simulations in PSCAD/EMTDC are presented to verify the stability conditions.
Description
© 2017 IEEE. Personal use of this material is permitted. Permission from IEEE must be obtained for all other uses, in any current or future media, including reprinting/republishing this material for advertising or promotional purposes, creating new collective works, for resale or redistribution to servers or lists, or reuse of any copyrighted component of this work in other works.
CitationCheah-Mane, M., Sainz, L., Liang, J., Jenkins, N., Ugalde , C. Criterion for the electrical resonance stability of offshore wind power plants connected through HVDC links. "IEEE transactions on power systems", 1 Novembre 2017, vol. 32, núm. 6, p. 4579-4589.
URIhttp://hdl.handle.net/2117/111326
DOI10.1109/TPWRS.2017.2663111
ISSN0885-8950
Publisher versionhttp://ieeexplore.ieee.org/document/7859376/
Collections
Share: