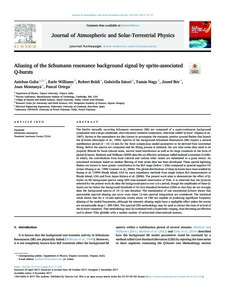 Except where otherwise noted, content on this work is licensed under a Creative Commons license : Attribution-NonCommercial-NoDerivs 3.0 Spain
ProjectATMOSPHERE-SPACE INTERACTIONS MONITOR(ASIM). OPERACIONES Y EXPLOTACION CIENTIFICA. PARTICIPACION ESPAÑOLA EN XIPE FASE A. CONTRIBUCION DE LA UPC A LA EXPLOTACION CIENTIFICA (MINECO-ESP2015-69909-C5-5-R)
Abstract
The Earth's naturally occurring Schumann resonances (SR) are composed of a quasi-continuous background component and a larger-amplitude, short-duration transient component, otherwise called ‘Q-burst’ (Ogawa et al., 1967). Sprites in the mesosphere are also known to accompany the energetic positive ground flashes that launch the Q-bursts (Boccippio et al., 1995). Spectra of the background Schumann Resonances (SR) require a natural stabilization period of ~10–12 min for the three conspicuous modal parameters to be derived from Lorentzian fitting. Before the spectra are computed and the fitting process is initiated, the raw time series data need to be properly filtered for local cultural noise, narrow band interference as well as for large transients in the form of global Q-bursts. Mushtak and Williams (2009) describe an effective technique called Isolated Lorentzian (I-LOR), in which, the contributions from local cultural and various other noises are minimized to a great extent. An automated technique based on median filtering of time series data has been developed. These special lightning flashes are known to have greater contribution in the ELF range (below 1 kHz) compared to general negative CG strikes (Huang et al., 1999; Cummer et al., 2006). The global distributions of these Q-bursts have been studied by Huang et al. (1999) Rhode Island, USA by wave impedance methods from single station ELF measurements at Rhode Island, USA and from Japan Hobara et al. (2006). The present work aims to demonstrate the effect of Q- bursts on SR background spectra using GPS time-stamped observation of TLEs. It is observed that the Q-bursts selected for the present work do alias the background spectra over a 5-s period, though the amplitudes of these Q- bursts are far below the background threshold of 16 Core Standard Deviation (CSD) so that they do not strongly alias the background spectra of 10–12 min duration. The examination of one exceptional Q-burst shows that appreciable spectral aliasing can occur even when 12-min spectral integrations are considered. The statistical result shows that for a 12-min spectrum, events above 16 CSD are capable of producing significant frequency aliasing of the modal frequencies, although the intensity aliasing might have a negligible effect unless the events are exceptionally large (~200 CSD). The spectral CSD methodology may be used to extract the time of arrival of the Q-burst transients. This methodology may be combined with a hyperbolic ranging, thus becoming an effective tool to detect TLEs globally with a modest number of networked observational stations.
CitationGuha, A., Williams, E.R., Boldi, R., Satori, G., Nagy, T., Bór, J., Montaña, J., Ortega, P. Aliasing of the Schumann resonance background signal by sprite-associated Q-bursts. "Journal of atmospheric and solar-terrestrial physics", Desembre 2017, vol. 165-166, p. 25-37.
URIhttp://hdl.handle.net/2117/111322
DOI10.1016/j.jastp.2017.11.003
ISSN1364-6826
Collections
Share: