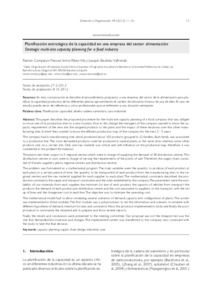 Except where otherwise noted, content on this work is licensed under a Creative Commons license : Attribution-NonCommercial-NoDerivs 3.0 Spain
ProjectPROGRAMACION RESTRINGIDA DE OPERACIONES EN TALLERES HIBRIDOS INTEGRADOS SOBRE UNIDADES EN SECUENCIA. INDUSTRIA DEL AUTOMOVIL (ASPECTOS ECONOMICOS, JURIDICOS Y SOCIALES) (MICINN-DPI2010-16759)
Abstract
This paper describes the proposed procedure for the multi-site capacity planning of a food company that was obliged to move one of its production sites to a new location. Due to this change the managers of the company wanted to know the capacity requirement of the new site, the assigned products to this plant and the impact of these decisions over the other manufacturing sites. In brief, they wanted to know the efficient production map of the company for the next 3 - 5 years. The company had 6 manufacturing sites which produced about 100 products grouped in 22 families. Each family was associated to a production line. The most demanded products could be produced in several plants, at the same time, whereas some other products only on a certain site. Only one raw material was critical and with influence on the productive map, therefore, it was considered in the problem formulation. The plants sent their output to 5 regional centres which were in charge of supplying the demand of 38 distribution centres. This distribution centres, in turn, were in charge of serving the requirements of the points of sale. Therefore, the supply chain consisted of 4 levels: suppliers, plants, regional centres and distribution centres. The problem was formulated as a mathematical program. The main variables were the quantity to produce of each product at each plant, in a certain period of time, the quantity to be transported of each product from the manufacturing sites to the regional centres and the raw material supplied for each supplier to each plant. The mathematical constraints described the production constraints, the supply and transport constraints and the rules established by the company. The parameters were the availability of raw materials from each supplier, the minimum lot size of each product, the capacity of vehicles from transport the products, the demand of each product per distribution centre and the cost associated to suppliers, to the transport, with the set up of lines and the changeover cost in each line. The objective was to minimize the operating cost. The mathematical model had to allow simulating several scenarios of demand, capacity and configuration of plants. The system was implemented in three modules. The first module was a pre-processor to set the information and scenario to simulate with different hypothesis of demand, minimum lot size, and constraints. Next, the processor implemented in Lindo and finally, the postprocessor to summarize the obtained and to prepare and show several reports. Finally, the results and conclusions were presented to the steering committee. Our proposal was not the cheapest but was the one that demanded less inversion and changes. The implemented system was transferred to the company who continued with the study to take the final decision.
CitationCompanys, R., Ribas, I., Bautista, J. Planificación estratégica de la capacidad en una empresa del sector alimentación (Strategic multi-site capacity planning for a food industry). "Dirección y Organización. Revista de Ingeniería de Organización", Desembre 2012, vol. 48, p. 11-16.
URIhttp://hdl.handle.net/2117/111321
ISSN2171-6323
Publisher versionhttp://www.revistadyo.es/index.php/dyo/article/view/405
Collections
Share: