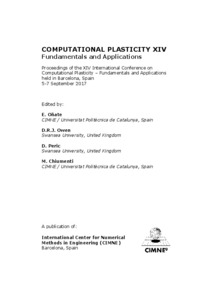 Document typeConference report
Rights accessOpen Access
Abstract
The main purpose of this paper is to develop a reliable method based on a three-dimensional (3D) finite-element (FE) model to simulate the constitutive behaviour of reinforced concrete structures strengthened with post-tensioned tendons. A 3D FE model was used, where the nonlinear material behaviour and geometrical analysis based on incremental–iterative load methods were adopted. The pre-tensioned concrete is modelled as a composite material whose behaviour is described with the serial-parallel rule of mixtures (S/P RoM) [1-3]. The effective pre-tensioning stress was applied as an initial strain imposition in the steel material used to model the tendons. The methodology is valid for both straight and curvilinear steel tendons. Examples of both cases will be shown. Validation by comparison with the analytic solution is done for the case of a concrete beam with a straight pre-tensioned steel tendon embedded. Other examples are also included.
CitationBarbu, L., Escudero-Torres, C., Cornejo, A., Martinez, X., Oller, S., Barbat, A. H. Analysis of pre-tensioned structures by means of a constitutive Serial-Parallel rule of mixtures. A: International Conference on Computational Plasticity. "Computational Plasticity XIV: Fundamentals and Applications: proceedings of the XIVInternational Conference on Computational Plasticity: Fundamentals and Applications, held in Barcelona, Spain 5-7September 2017". Barcelona: 2017, p. 471-482.
URIhttp://hdl.handle.net/2117/111299
ISBN978-84-946909-6-9
Publisher versionhttp://congress.cimne.com/complas2017/admin/files/fileabstract/a311.pdf
Collections
Share: