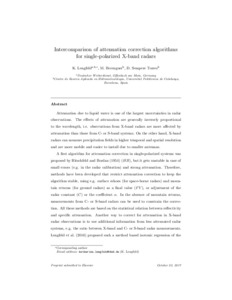 Attenuation due to liquid water is one of the largest uncertainties in radar observations. The effects of attenuation are generally inversely proportional to the wavelength, i.e. observations from X-band radars are more affected by attenuation than those from C- or S-band systems. On the other hand, X-band radars can measure precipitation fields in higher temporal and spatial resolution and are more mobile and easier to install due to smaller antennas. A first algorithm for attenuation correction in single-polarized systems was proposed by Hitschfeld and Bordan (1954) (HB), but it gets unstable in case of small errors (e.g. in the radar calibration) and strong attenuation. Therefore, methods have been developed that restrict attenuation correction to keep the algorithm stable, using e.g. surface echoes (for space-borne radars) and mountain returns (for ground radars) as a final value (FV), or adjustment of the radar constant (C) or the coefficient a. In the absence of mountain returns, measurements from C- or S-band radars can be used to constrain the correction. All these methods are based on the statistical relation between reflectivity and specific attenuation. Another way to correct for attenuation in X-band radar observations is to use additional information from less attenuated radar systems, e.g. the ratio between X-band and C- or S-band radar measurements. Lengfeld et al. (2016) proposed such a method based isotonic regression of the ratio between X- and C-band radar observations along the radar beam. This study presents a comparison of the original HB algorithm and three algorithms based on the statistical relation between reflectivity and specific attenuation as well as two methods implementing additional information of C-band radar measurements. Their performance in two precipitation events (one mainly convective and the other one stratiform) shows that a restriction of the HB is necessary to avoid instabilities. A comparison with vertically pointing micro rain radars (MRR) reveals good performance of two of the methods based in the statistical k-Z-relation: FV and a. The C algorithm seems to be more sensitive to differences in calibration of the two systems and requires additional information from C- or S-band radars. Furthermore, a study of five months of radar observations examines the long-term performance of each algorithm. From this study conclusions can be drawn that using additional information from less attenuated radar systems lead to best results. The two algorithms that use this additional information eliminate the bias caused by attenuation and preserve the agreement with MRR observations.
CitationLengfeld, K., Berenguer, M., Sempere-Torres, D. Intercomparison of attenuation correction algorithms for single-polarized X-band radars. "Atmospheric research", Març 2018, vol. 201, p. 116-132.
URIhttp://hdl.handle.net/2117/111288
DOI10.1016/j.atmosres.2017.10.020
ISSN0169-8095
Publisher versionhttp://www.sciencedirect.com/science/article/pii/S0169809517308864