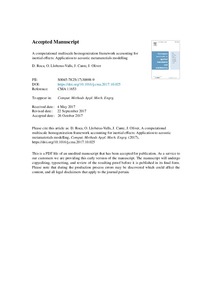 Document typeArticle
Rights accessOpen Access
European Commission's projectCOMP-DES-MAT - Advanced tools for computational design of engineering materials (EC-FP7-320815)
Abstract
A framework, based on an extended Hill–Mandel principle accounting for inertial effects (Multiscale Virtual Work principle), is developed for application to acoustic problems in the context of metamaterials modelling. The classical restrictions in the mean values of the micro-displacement fluctuations and their gradients are then accounted for in a saddle-point formulation of that variational principle in terms of Lagrange functionals. A physical interpretation of the involved Lagrange multipliers can then be readily obtained. The framework is specifically tailored for modelling the phenomena involved in Locally Resonant Acoustic Metamaterials (LRAM). In this view, several additional hypotheses based on scale separation are used to split the fully coupled micro-macro set of equations into a quasi-static and an inertial system. These are then solved by considering a projection of the microscale equations into their natural modes, which allows for a low-cost computational treatment of the multiscale problem. On this basis, the issue of numerically capturing the local resonance phenomena in a FE context is addressed. Objectivity of the obtained results in terms of the macroscopic Finite Element (FE) discretization is checked as well as accuracy of the homogenization procedure by comparing with direct numerical simulations (DNS). The appearance of local resonance band-gaps is then modelled for a homogeneous 2D problem and its extension to multi-layered macroscopic material is presented as an initial attempt towards acoustic metamaterial design for tailored band-gap attenuation.
CitationRoca, D., Lloberas-Valls, O., Cante, J.C., Oliver, J. A computational multiscale homogenization framework accounting for inertial effects: application to acoustic metamaterials modelling. "Computer methods in applied mechanics and engineering", Març 2018, vol. 330, p. 415-446.
URIhttp://hdl.handle.net/2117/111284
DOI10.1016/j.cma.2017.10.025
ISSN0045-7825
Publisher versionhttp://www.sciencedirect.com/science/article/pii/S0045782517306989
Collections
Share: