On evaluating temperature as observable for CMOS technology variability 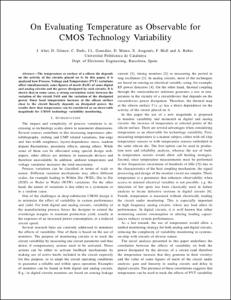 The temperature at surface of a silicon die depends on the activity of the circuits placed on it. In this paper, it is analyzed how Process, Voltage and Temperature (PVT) variations affect simultaneously some figures of merit (FoM) of some digital and analog circuits and the power dissipated by such circuits. It is shown that in some cases, a strong correlation exists between the variation of the circuit FoM and the variation of the dissipated power. Since local temperature increase at the silicon surface close to the circuit linearly depends on dissipated power, the results show that temperature can be considered as an observable magnitude for CMOS technology variability monitoring.
CitationAltet, J. [et al.]. On evaluating temperature as observable for CMOS technology variability. A: European workshop on CMOS Variability. "1st IEEE European Workshop on CMOS Variability". Montpellier: 2010, p. 1-6.
URIhttp://hdl.handle.net/2117/11126