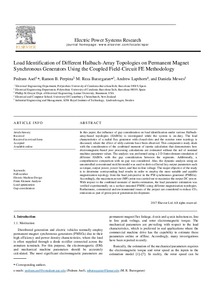 Except where otherwise noted, content on this work is licensed under a Creative Commons license : Attribution-NonCommercial-NoDerivs 3.0 Spain
Abstract
In this paper, the influence of gap consideration on load identification under various Halbach-array-based topologies (HABOs) is investigated while the system is on-duty. The load characteristics of a radial flux generator with closed-slots and the exterior rotor topology is discussed, where the effect of eddy-currents are observed. This comparative study deals with the consideration of the combined moment of inertia calculation that demonstrates how electromagnetic-based post processing calculations are estimated without the aid of nominal machine parameter values. The analysis was performed using a 2-D finite-element simulation of different HABOs with the gap consideration between the segments. Additionally, a comprehensive comparison with no gap is considered. Also, the dynamic analysis using an uncontrolled conventional rectifier model is used to derive effected key output parameters such as torque, output power, power factor, and line-to-line voltage. The major objective of the study is to determine corresponding load results in order to employ the most suitable and capable magnetization topology from the load perspective in the PM synchronous generator (PMSGs). Accordingly, the maximum power (MP) point was carried out to maximize the output DC power. With respect to the combined moment of inertia estimation, the load parameter estimation is verified experimentally on a surface-mounted PMSG using different magnetization topologies. Furthermore, commercial and environmental issues of the project are considered to reduce CO2 emissions as part of green power generation development.
CitationAsef, P., Bargallo, R., Barzegaran, M., lapthorn, A., Mewes, D. Load identification of different Halbach-array topologies on permanent magnet synchronous generators using the coupled field-circuit FE methodology. "Electric power systems research", 1 Gener 2018, vol. 154, p. 484-492.
URIhttp://hdl.handle.net/2117/111237
DOI10.1016/j.epsr.2017.08.041
ISSN0378-7796
Publisher versionhttp://www.sciencedirect.com/science/article/pii/S0378779617303668?via%3Dihub
Collections
Share: