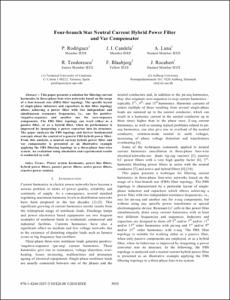 Document typeConference report
Rights accessOpen Access
Abstract
This paper presents a solution for filtering current harmonics in three-phase four-wire networks based on the usage of a four-branch star (FBS) filter topology. The specific layout of single-phase inductors and capacitors in this filter topology allows achieving a power filter with two independent and simultaneous resonance frequencies, i.e., one for positive- /negative-sequence and another one for zero-sequence components. The FBS filter topology can work either as a passive filter, or as a hybrid filter, when its performance is improved by integrating a power converter into its structure. The paper analyzes the FBS topology and derives fundamental concepts about the control of a generic FBS hybrid power filter. From this analysis, a neutral current hybrid power filter and var compensator is presented as an illustrative example applying the FBS filtering topology to a three-phase four-wire system. An evaluation using simulation and experimental results is conducted as well.
CitationRodriguez, P. [et al.]. Four-branch star neutral current hybrid power filter and var compensator. A: IEEE Energy Conversion Congress and Exposition. "IEEE Energy Conversion Congress and Expo". Atlanta: 2010, p. 3955-3962.
URIhttp://hdl.handle.net/2117/11121
DOI10.1109/ECCE.2010.5617796
ISBN978-1-4244-5287-3
Collections
Share: