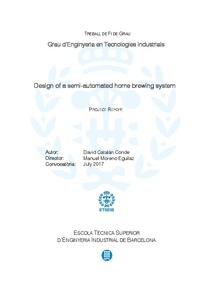 Document typeBachelor thesis
Rights accessOpen Access
Abstract
Beer is, by far, the most widely consumed alcoholic drink and the third most popular drink overall, only surpassed by water and tea. But no, this project will not consist of explaining its characteristics or the alleged benefits of this golden drink. In recent years, among the growth of craft beer, the number of people who make their own beer at home has been increased, those are called homebrewers, and it seems that this tendency will continue expanding. This project aspires to create a system that allows to speed up this process making use of the technology, also, set up the basis to carry forward the idea and materialize it. The first stage of this work will be to outline the fundamentals of the idea that we want to achieve and how. Designing the equipment, as well as which components will belong to, will let to see the final elements needed and how they will be controlled. In turn, the boundaries must be defined to know until which part of the process the system will take part in. Once all the elements of the system and the steps that have to be controlled have been defined, set in motion the design of the software in charge will become possible. An application will be created in order to read recipes in a standardized and widely used format by the entire brewing community. This program will also show all the relevant information of the corresponding recipe, its characteristics, ingredients, duration of each step and all those parameters that are relevant to the process. At the same time, the program itself will guide the user through the whole procedure, allowing him or her to know the temperatures in real time, control the actuators and ultimately, simplifying the way to brew beer. From the start, the plan is to build up the project as open-source to allow its free exploitation and provide the possibility to enhance it to keep it growing.
SubjectsBrewing industry, Cervesa -- Fabricació
URIhttp://hdl.handle.net/2117/111186
Collections
Share: