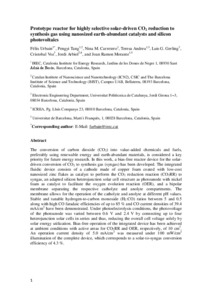 The conversion of carbon dioxide (CO2) into value-added chemicals and fuels, preferably using renewable energy and earth-abundant materials, is considered a key priority for future energy research. In this work, a bias-free reactor device for the solar-driven conversion of CO2 to synthesis gas (syngas) has been developed. The integrated fluidic device consists of a cathode made of copper foam coated with low-cost nanosized zinc flakes as catalyst to perform the CO2 reduction reaction (CO2RR) to syngas, an adapted silicon heterojunction solar cell structure as photoanode with nickel foam as catalyst to facilitate the oxygen evolution reaction (OER), and a bipolar membrane separating the respective catholyte and anolyte compartments. The membrane allows for the operation of the catholyte and anolyte at different pH values. Stable and tunable hydrogen-to-carbon monoxide (H2:CO) ratios between 5 and 0.5 along with high CO Faradaic efficiencies of up to 85% and CO current densities of 39.4 mA cm-2 have been demonstrated. Under photoelectrolysis conditions, the photovoltage of the photoanode was varied between 0.6 V and 2.4 V by connecting up to four heterojunction solar cells in series, and thus reducing the overall cell voltage solely by solar energy utilization. Bias-free operation of the integrated device has been achieved under ambient conditions with active areas for CO2RR and OER, respectively, of 10 cm2. An operation current density of 5.0 mA cm-2 was measured under 100 mW cm-2 illumination of the complete device, which corresponds to a solar-to-syngas conversion efficiency of 4.3%.
CitationUrbain, F., Tang, P., Carretero, N.M., Andreu, T., Gerling Sarabia, L., Voz, C., Arbiol, J., Morante, J. A prototype reactor for highly selective solar-driven CO2 reduction to synthesis gas using nanosized earth-abundant catalysts and silicon photovoltaics. "Energy and environmental science", Octubre 2017, vol. 10, p. 2256-2266.
URIhttp://hdl.handle.net/2117/111141
DOI10.1039/C7EE01747B
ISSN1754-5692
Publisher versionhttp://pubs.rsc.org/en/Content/ArticleLanding/2017/EE/C7EE01747B#!divAbstract